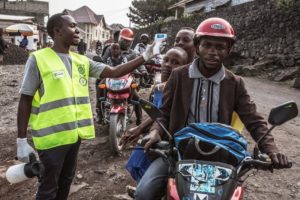 The World Bank Group has announced a $300 million package of grants and credits to support the fight against the deadly Ebola virus in Democratic Republic of Congo.

According to a statement released on Wednesday, the Washington-based financial institution said the funding would meet about half the needs of a new Ebola response plan that is due to be agreed by the Congolese government and an international consortium next week.

Last week, World Health Organization said the Ebola response would need “hundreds of millions” of dollars for the rest of this year.

The UN health body declared the Ebola outbreak in DRC is an international emergency. The declaration raises the outbreak’s visibility and public health officials hope it will galvanize the international community to fight the spread of the frequently fatal disease.

The current outbreak is spreading in a turbulent Congo border region where dozens of rebel groups are active and where Ebola had not been experienced before. Efforts to contain the virus have been hurt by mistrust among wary locals that has prompted deadly attacks on health workers.

While the risk of regional spread remains high, the risk outside the region remains low, WHO chief Tedros Adhanom Ghebreyesus said last week.

In a briefing to the UN Security Council Wednesday, Leila Zerrougui – UN Special Representative and head of the UN’s Stabilization Mission (MONUSCO) – said deadly environment plus political and social obstacles hinder Ebola fight in the country.

“Along with continuing high levels of community distrust around the response to the epidemic,” militants, including the ADF and Mai-Mai groups, have caused “a deadly environment” for the people working to counter the virus, “to the point of being specifically threatened and killed by armed groups”, Leila Zerrougui said.

She stated that the Ebola epidemic has now “claimed the lives of more than 1,700 people” and recent isolated cases in Goma and across the border in Uganda “have heightened concerns about its spread outside of the Beni and Butembo areas”.