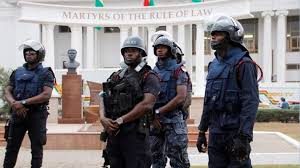 Ghana said police foiled a suspected coup d’état on Friday when they arrested three people believed to have been amassing makeshift bombs, weapons and computer equipment in a plot targeting the presidency.

According to authorities, the suspects created a group known as Take Action Ghana (TAG) whose objective was to mobilize young people for “nation building” and to “radicalize” them against the current regime.

The arrest of the three men was the result of an investigation and surveillance lasting more than fifteen months, police said.

“The joint operation was to neutralize an elaborate plot targeted at the presidency, and with the ultimate aim of destabilizing the country,” information minister Kojo Oppong Nkrumah said in a statement.

One of the suspects is a medical doctor at Citadel Hospital. According to authorities, he used his work place as a base to manufacture and store weapons.

The men were allegedly in contact with some soldiers and an officer, who were also arrested in connection with the alleged plot.

Ghana has a reputation as a poster child for democracy and a haven of stability in west Africa.