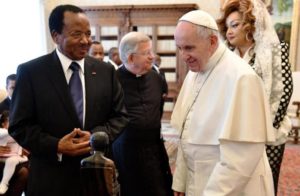 Pope Francis has prayed on Sunday for the success of a national dialogue in Cameroon.

Cameroon has started a “national dialogue” today in a bid to end the separatist conflict in the country’s Anglophone provinces, but key rebel leaders have already refused to participate.

Addressing thousands of people at his weekly general audience in St. Peter’s Square, the pontiff expressed his closeness to the people of Cameroon and asked the faithful to pray for national dialogue and lasting solutions for peace.

Feeling close to the sufferings and hopes of the beloved Cameroonian people, “I invite everyone to pray so that this dialogue may be fruitful and lead to solutions of just and lasting peace, to the benefit of all.”

Cameroon has been gripped by violence since November 2016. Nearly 3,000 people have died and half a million fled their homes since fighting broke out between the army and armed fighters who want independence for Cameroon’s two English-speaking provinces.

According to Cameroonian Authorities, dialogue would bring together a wide range of people to find a solution to the separatist socio-political crisis that has plagued the two Anglophone regions.

Most of the leaders have expressed willingness to hold talks with the government but in the presence of an international mediator and in a foreign country with the terms for secession the main item on the agenda, according to the ICG.

English-speakers account for about a fifth of Cameroon’s population of 24 million, who are majority French-speaking.

President Paul Biya has been in power for 37 years.