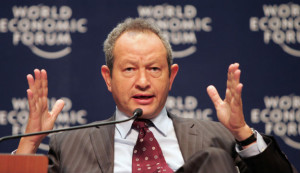 The Sawiris brothers, one of Egypt’s richest families, have decided to increase their investment to an unprecedented level following the ousting of Morsi by the military. The family controls the famous Orascom corporate, which is present in almost all sectors of Egypt.
The eldest of the three brothers, Naguib Sawiris, said the family is ready to undertake “any new projects where we can invest, any new factories that we can open, (and) any new initiatives that will provide jobs for the young people of Egypt.” Naguib Sawiris is very confident that the country’s economy will be back on its foot. According to him, they employ more than one tenth of a million Egyptians; thereby making Orascom Corporate one of the biggest employers in the private sector. He is urging the Egyptians to leave the streets and go back to work in order to contribute towards nation building.
In his own words, he revealed that the Sawiris “family is going to be investing in Egypt like never before.” Although he was a strong advocate of the campaign that led to Morsi’s departure whom he accused of bullying opponents to his rule, Naguib’s investment revelations could serve as a confidence booster to other investors.
Egypt has been struggling to avoid bankruptcy after the fall of Mubarak and President Morsi was making efforts to secure funds from Arab states. Naguib admitted that he urged countries like the UAE and Kuwait to snub Morsi’s requests. He believes that the financial support given to Egypt in recent times by Arab states is an obligation on their behalf because “if Egypt falls, or goes into turmoil, the whole Middle East goes down the drain. So they are defending also their countries also by helping Egypt.”