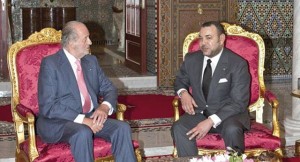 The official visit the King of Spain, Juan Carlos I, is currently paying to Morocco is seen as a family reunion in view of the longstanding relations binding the two monarchies but also as an opportunity to explore ways and means of upgrading economic relations between the two countries and partnership between Moroccan and Spanish businessmen and economic operators.
On both sides, expectations are great particularly with regard to the promotion of a new win-win partnership seeking more balanced trade exchanges since the current trade balance is showing a deficit to the detriment of Morocco. As put by the chairwoman of the employers’ association “CGEM”, Miriem Bensalah Chaqroun, there is a deficit in the trade balance, there is an imbalance in the relationship in general, and commercial relations are rather volatile.
Aware of the resentment of Moroccan operators and in a bid to reassure them, the Spanish embassy issued a press release on the eve of the visit, stating that “the visit of King Juan Carlos I will reinforce the framework of an enhanced economic dialogue, based on a new strategic partnership between Spain and Morocco and a deeper dialogue between the two countries’ entrepreneurs in search of new common opportunities for wealth creation.”
As an evidence to Spain’s resolve to boost its economic relations with Morocco, the press release outlined that the Spanish sovereign is accompanied by “a large high-level business leaders delegation representing nearly all sectors, in order to open up new opportunities and give a boost to projects and investments underway.”
The press release which insisted on « a mutually beneficial cooperation » and “a win-win relationship” highlighted the steady progression of Spanish exports to Morocco over the past two years, particularly in 2012 when Spain outpaced France as Morocco’s first trading partner.
During the same year, Morocco’s exports to Spain declined by 4%, but the trend seemed to be reversing during the first months of 2013.
According to the Spanish embassy release Morocco has become the leading supplier of Spain in Africa while Spain has become Morocco’s first customer in Europe.
In 2012, 31.7% of Moroccan exports to the European Union were destined to Spain, said the release.
As Spain is hardly hit by a financial crisis, King Juan Carlos I and his large accompanying delegation will actually try to seize any opportunity to alleviate this crisis and take the most of the issues on the agenda of talks: Investments, trade exchanges, access to public procurement and public bidding, greater investment protection, as well as the agricultural and fisheries agreements between Morocco and the European Union which are of paramount importance to Spain.
The possibility to co-locate in Latin America and Africa will also figure high on the agenda, Morocco being at present a key player in Spanish companies’ chain of industrial added value, especially in the car industry and textile sector.
Whatever huge the stakes may be for both countries, officials on both sides of the Strait of Gibraltar are confident that the two kingdoms have enough assets to make the most of their cooperation, build up a common prosperous future and institute a win-win partnership.