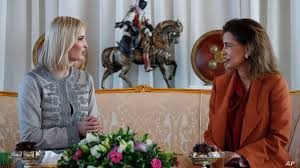 Ivanka Trump, daughter and senior advisor to the US President, has praised the leadership of King Mohammed VI on critical issues such as peace and security in the Middle East, as well as to ensure peace, stability and development for Africa.

In a joint press release issued Friday following the three-day visit paid to Morocco by the White House advisor, and CEO of the Millennium Challenge Corporation Sean Cairncross to advance women’s economic empowerment through the Women’s Global Development and Prosperity Initiative (W-GDP), Mrs Ivanka described Morocco as a major non-NATO ally of Washington, saying the longstanding friendship and cooperation between the two countries underpins broader US engagement in the region.

During the visit, Advisor Trump had an exchange with King Mohammed VI. She lauded the reform process undertaken by the Moroccan Monarch during the past twenty years, especially on the issue of advancing women’s rights and promoting their economic empowerment.

The visit of the US delegation reinforced the shared commitment of the United States and Morocco to advance women’s economic empowerment, by working in coordination with the United States’ W-GDP, which aims to advance global women’s economic empowerment, reaching 50 million women by 2025 through US government activities and private-public partnerships.

Under the royal strategic guidelines, the Moroccan government has enacted critical reforms that have helped Moroccan women secure greater rights and economic prosperity. Most recently, consistent with the shared goal of inclusive economic growth embodied in the MCC Compact, and the principles of the W-GDP Initiative, the Moroccan Parliament passed important laws that will improve women’s rights to collective lands and allow them to participate in the economic opportunities generated by those lands.

The US delegation congratulates the Moroccan Government on the swift adoption of these laws, said the joint communiqué.

The United States and Morocco reiterate on this occasion their support for legal reforms to advance women’s ability to work in the same jobs and sectors as men, and to manage land in the same way as men.

The parties, through MCC’s second Compact in Morocco, signed an Implementation Letter whereby Rabat pledges to respect the principle of equity between women and men in relation to land rights.

The parties also agreed to work together to support the development of a National Land Strategy in a manner to further women’s participation in the economy through their improved access to land in Morocco.

In the Implementation Letter, the parties also agreed that funds from the MCC Compact would be made available to establish a Land Gender Inclusion Center which, among other activities, will collect, analyze and use data to support future policy making that will further increase women’s inclusion in land-related economic growth.

Through its second Compact with the MCC, women’s economic empowerment is a core component, consistent with the objectives of W-GDP.

In the joint press release, Morocco pledged to continue empowering Moroccan women through improved access to secure land rights and workforce programs for women that provide skills development and job placement opportunities, and by removing legal and regulatory barriers.

For its part, Washington vowed to continue to support Morocco’s commitment to inclusive economic growth that empowers and integrates women into the local and national economy.

During the high-level delegation’s visit, the United States, in partnership with Morocco, announced the selection of grant recipients for the Results Based Financing Jobs Fund. The Fund, supported by the MCC and together with the ministry of employment & vocational integration, the ministry of economy, the national agency for the promotion of employment (ANAPEC), and administered through the Millennium Challenge Account – Morocco, uses an innovative results-based approach for supporting providers of job training and placement services for out-of work Moroccan women.

The parties also announced that the MCC will, together with the Millennium Challenge Account — Morocco and the Ministry of education, implement a Women in Science (WiSci) camp, supported by Google and Intel, next summer in Morocco. The camp will include girls from Morocco, Cote d’Ivoire, and the United States.

In their joint communiqué, Rabat and Washington agreed to work closely together to enhance their strategic partnership to advance women’s economic empowerment and entrepreneurship.