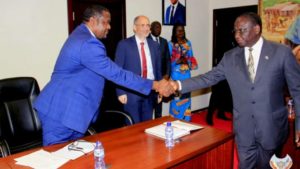 It’s official. The government of Democratic Republic of Congo can now borrow money from the International Monetary Fund. The two parties last weekend agreed to a financial assistance package that would allow the IMF to resume lending to Congo for the first time since 2012.

The IMF suspended its last financial aid to Congo, a loan program worth more than $500 million in 2012, after the government failed to provide sufficient details on the sale of state mining assets to an offshore company.

IMF delegation leader Mauricio Villafuerte said that the terms of the Rapid Credit Facility would be submitted to the IMF board in mid-December for final approval.

“The economic situation (in Congo) is very difficult now because of weakness in controlling spending during the political transition and new spending initiatives”, Villafuerte said.

Congo’s central bank governor said last week that he expected the program to be worth about $370 million.
Congo is a leading miner of cobalt, copper, gold, tin and diamonds but remains one of the world’s least developed countries, largely due to corruption and poor governance.

Mining companies including Glencore and Barrick Gold are hoping to win a sympathetic ear from President Tshisekedi — elected earlier this year–, regarding the country’s mining code which was updated last year whilst Kabila was still in power. The code does not recognize stability clauses contained in an earlier version.

As a reminder, Tshisekedi’s administration has presented an ambitious draft budget to the National Assembly. More than $10 billion is needed for the various projects to be carried out in 2020. This is an increase of 63.2% compared to 2019.