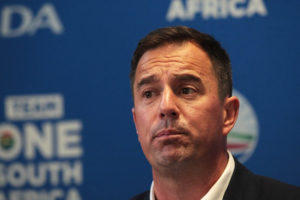 In South Africa, the Democratic Alliance (DA) on Sunday appointed John Steenhuisen as interim leader a month after the leader of the country’s main opposition party resigned.

Mmusi Maimane resigned together with former Nelson Mandela Bay Mayor Athol Trollip last month, saying that the party was no longer a vehicle best suited to take forward the vision of building one South Africa for all.

The DA’s share of the vote fell to 20.8% in this year’s election, from 22.2% five years ago, losing votes to the ultra-leftist Economic Freedom Fighters and the mainly Afrikaner Freedom Front Plus.

John Steenhuisen has been voted the interim leader of the DA on Sunday as predicted by many political pundits.

Steenhuisen told a press briefing that the race-based policies of the ruling African National Congress had not worked and that the DA was the only party fighting for a truly non-racial South Africa with equality of opportunity.

“Our fight is to lift more people out of poverty and lift them into opportunity, and restore the dignity of many South Africans who are still, 25 years after the end of apartheid, waiting for their freedom,” Steenhuisen said.