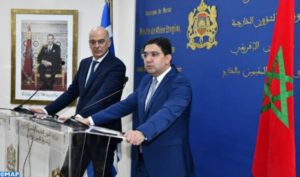 The remarks were made in Rabat by Greek foreign minister Nikos Dendias following talks with his Moroccan peer Nasser Bourita in Rabat.

The Greek minister also expressed his country’s support for the UN process to reach a political and mutually acceptable solution to the Sahara dispute.

“We encourage all parties to continue their commitment in a spirit of realism and compromise,” said Dendias.

The Greek Foreign Minister also highlighted the role of Morocco, under the leadership of King Mohammed VI, at the regional and international levels, as a “provider” of peace and stability and an “engine” of growth and development in the region and in Africa.