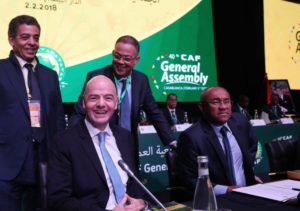 The Polisario separatist group and its Algerian & South African supporters suffered another major setback after the FIFA, the world football governing body, affirmed that Fustal African Cup of Nations 2020 will be organized as planned in the Moroccan Sahara city of Laayoune, from January 28 to February 7.

In its tweet (https://twitter.com/fifacom_ar/status/1221429073618051072), the FIFA says Eight African teams drawn into two groups will take part in the African Futsal tournament in the Moroccan city of Laayoune.

After South Africa decided to withdraw from the event in a bid to disrupt it for purely political reasons, the African Football Confederation (CAF) moved quickly to replace it with Mauritius, while the Algerian hostile stand against holding 2020 Fustal African Cup of Nations in Laayoune was simply ignored, despite the letter of protest sent to CAF chief, Ahmad Ahmad.

Futsal Africa Cup of Nations is a competition gathering best qualifying teams from across the African continent. It is organized by CAF, the governing body of African football.

The top three teams in the Laayoune venue will represent Africa at the 2020 FIFA Futsal World Cup to be held in Lithuania from Sept.12 to Oct.4.