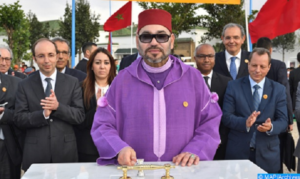 King Mohammed VI on Friday 07 February 2020 launched in Agadir the construction works of the city’s psychiatric hospital, a project that is part of the implementation of the urban development program of the city of Agadir (2020-2024), launched last Tuesday by the Sovereign.
This project, which requires an investment of more than 50 million Euros, shows the particular importance attached by the Sovereign to the health sector, through the development of hospital infrastructure and the strengthening of primary health services.