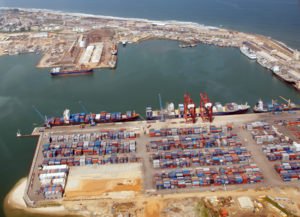 The President of the Republic of Congo Denis Sassou Nguesso this week inaugurated new infrastructure for the Congo terminal in the commercial city of Pointe Noire.

Managers of the port hope this will further consolidate its position as a transit country in the Gulf of Guinea.

Séraphin Bhalat, CEO of the autonomous port of Pointe Noire, said the introduction of this modern infrastructure and equipment has made it possible to significantly improve the capacity and operational performance of the port.

The port received two separate awards in 2018 and 2019 as Best West and Central African Port.

After the profound economic crisis that plagued the country from mid-2014 following the decline in oil prices, the Congolese economy resumed an upward trajectory last year.

Growth was driven by the increase in oil production and by favorable market conditions, with oil prices holding steady.