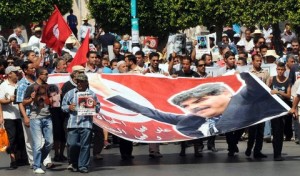 Protesters in Tunisia have been given a glimpse of hope by Speaker Mustapha Ben Jaafar of the National Constituent Assembly, when he announced that the body will be suspending its functions until the political parties begin dialogues to satisfy national interest. The protesters want the constituent assembly to be dissolved and for the government to resign.
Tunisia’s Constituent Assembly should have completed drafting the constitution 8 months ago. Lately, it has been hit by absenteeism because more than 70 of its members have gone on strike to protest against the 25th July assassination of Mohamed Brahmi; a member of the assembly.
The assassination reignited tensions. Opposition political parties have organized protests demanding the assembly’s resignation and the Tunisian General Labor Union (UGTT) which has more than half a million members is in support of the demands.
Although the demonstrators want the government to resign for fresh elections, Prime Minister Larayedh has insisted that they will remain in power for interest of “national unity.” He wants the assembly to “hurry and finish the constitution quickly” for elections to be held in December. Elections are to be held after the completion of the new constitution and an electoral law.
The declaration by Speaker Jaafar of the National Constituent Assembly that they will “suspend” the drafting of the constitution “until dialogue commences, in the service of Tunisia” comes a setback to prime Minister’s wish. Jaafar blamed the political leaders for dividing the country “instead of working towards unity.” He also warned “the people are fed up with this situation and can no longer tolerate this wait.”
The decision could oblige the government to hold discussions with secular opposition parties to resolve the political crisis.