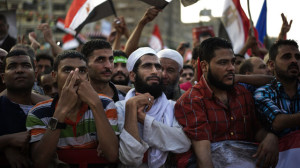 “The train of the future has departed, and everyone must realize the moment and catch up with it, and whoever fails to realize this moment must take responsibility for their decision.” These were the words of acting President Adli Mansour to Morsi’s supporters in his Eid el Fitr message to the nation. Mediators fear that there will be bloodshed after losing hope in establishing a common ground between the Muslim Brotherhood and the government.
Acting president Mansour has reiterated that his plans to hold elections will not be slowed down but the Muslim Brotherhood has vowed that only Morsi’s return will take them out of the streets. The government is willing to use the necessary force required to pull them out of the streets.
U.S. Secretary of State John Kerry and EU foreign policy Chief Catherine Ashton in a joint statement warned that the situation is “very fragile” after the failure of efforts to end the crisis. U.S envoy William Burns has left Egypt but Bernardino Leon of the EU stays behind with hopes of brokering a reconciliation deal. Both the interim government and the Muslim Brotherhood said the mediations have failed.
Clashes between the security personnel and the demonstrators are expected to be the final shown down, but there are fears that it will be only result to bloodshed. Pro-Morsi supporters are barricading their surroundings with sandbags and bricks for an eventual operation to remove them from their camps.
Interim Prime Minister Hazem el-Beblawi has warned that “utmost force and decisiveness” will be used if there is any further violence from Morsi supporters. The Brotherhood’s spokesman Gehad El-Haddad advised him to send “positive signals, not live bullets” rather than “preparing for an even bigger massacre.”