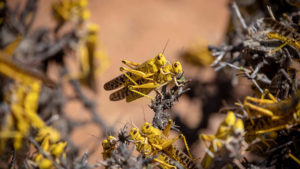 The European Commission announced Friday it was mobilizing an additional €10 million to respond to one of the worst Desert Locust outbreaks in decades in East Africa. The outbreak could have devastating consequences on food security in an already vulnerable region where 27.5 million people suffer from severe food insecurity and at least 35 million more are at risk.

Commissioner for International Partnerships, Jutta Urpilainen, stressed: “This crisis shows, once again, how fragile food systems can be when facing threats. The EU’s approach, in line with the Green Deal, puts sustainability at its heart. We must enhance the capacity to collectively respond to these threats and we also have a responsibility to step in now with resolve to avoid a major crisis, tackle the root causes of this natural disaster, and protect livelihoods and food production.”

The Food and Agriculture Organization (FAO) has formulated a response plan, but country interventions must be rapidly scaled-up to support national governments of the affected countries. A narrow window of opportunity exists now to contain this disastrous outbreak and protect the livelihoods of millions of vulnerable people across East Africa and beyond.

The EU response, working alongside partners in the Global Network against Food Crises, has been swift. This partnership includes the EU, FAO, the World Food Program and other stakeholders and was created to facilitate sustainable solutions to food crises across the globe.

The EU had earlier mobilized €1 million from humanitarian funds to assist the countries affected by the locust invasion.

The situation has rapidly deteriorated over the past month in East Africa. The long rainy season which will start in March, will bring with it a new wave of breeding and further spreading in the region. Damages to crop and pasture are already being reported across Kenya, Ethiopia and Somalia, the three most affected countries, but losses may quickly spread to other neighboring countries, particularly Djibouti, Eritrea, South Sudan, Tanzania and Uganda. Yemen, Sudan, Iran, India and Pakistan are also at risk.