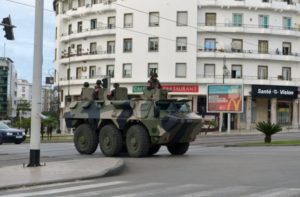 The state of health emergency that was initially due to end on April 20 has been extended for an additional month to May 20.

The decision was announced following a cabinet meeting, convened on Saturday under the chairmanship of Head of government Saad Dine El Otmani.
The cabinet meeting adopted the draft decree extending the state of health emergency throughout the national territory in order to combat the spread of the novel coronavirus, said the Government spokesman Saeid Amzazi.

The spokesman also reassured citizens regarding the availability of foodstuff supply covering the month of Ramadan, which is usually characterized by high consumption.

Morocco has taken a series of measures to avert a surge in coronavirus infections. Before imposing the lockdown on march 20, it closed its borders to passenger traffic and banned inter-city travel and later closed schools, mosques, cafes and restaurants and entertainment venues, and all non-necessary trades.

The measures have helped Morocco spare thousands of deaths and prepare its health system to deal with coronavirus patients.

Social measures have also been taken with the creation of a special fund offering compensations to those who had to stop work because of the virus.

Textile manufacturers and aeronautics suppliers have been encouraged to produce masks and ventilators respectively.

The Ministry of Health has confirmed Saturday at 6 p.m. that 121 new cases were recorded during the past 24 hours. It also announced two additional deaths that bring the number of total fatalities to 173, while the number of recoveries has reached 314.

Morocco witnessed over the past few days a surge in the number of cases after clusters were detected in industrial and commercial units in Casablanca, Fez, Nador, and other regions.