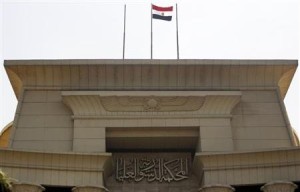 The Egyptian interim government could be facing its first test from political parties other than the Muslim Brotherhood as the Nour Party seriously considers withdrawing from the 50-member constitutional draft committee. The committee is formed by Interim president Adly Mansour to amend the constitution. Islamist parties have been critical of its formation but this is the first time one of them has called a meeting to decide on the matter.
The Muslim Brotherhood has always maintained that the committee is inexistence because it was formed by an illegal government.  A claim has been filed by the Brotherhood Without Violence before an administrative court to end the mandate of the committee and dissolve it.
Nour Party is unhappy with the availability of only one post in the committee, despite the possibility of three, which is occupied by its leader Bassam al-Zarqa for the part. The party wants 5seats for Islamist representatives.
The Islamist parties have been complaining of being sidelined by the military backed government. Nour’s spokesperson, Sherif Taha, said the party will react to plans designed to “marginalize” Islamists. Sufi representative Abdallah al-Nasser also claimed the committee was “unfair” because it neglected to include Sufi figures.
Another party, Jamaa al-Islamiya, is also unpleased with the committee’s formation. It stated that it lacked legal basis because it didn’t contact them officially when it choose its representatives. The party has vowed to sabotage the committee by voting against their constitutional amendments or boycott the referendum.
Nour party did declare that it won’t withdraw from the committee nor boycott its efforts but has now stated that it has retracted its statement. The party is accusing the government of allocating syndicate and public figure seats to liberal and secular figures in order to outnumber the Islamists.