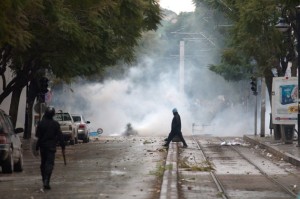 Ansar al-Sharia has hit back at the government after it held it responsible for the political assassinations of Mohamed Brahmi and Chokri Belaid. The government claimed that the group is also linked to Al-Qaeda. Ansar al-Sharia has claimed that the government’s allegations are means of dragging the U.S to “directly intervene” in Tunisia. However, it affirmed that it is loyal to “jihadist groups” but also an independent organization.
The government classed Ansar al-Sharia as an illegal group in May and last week, Prime Minister Ali Laarayedh declared it a terrorist organization. People who claim to be “extremists” have also been arrested by security officials.
Despite the ban, Ansar al-Sharia has been holding charity programs to support its activities. It claimed that the government allegations against it were aimed at diverting the attention of the Tunisian’s from the “catastrophe” of the “alliance with Essebsi,” the leader of the Nidaa Tounes opposition party.
Although Ansar al-Sharia didn’t clearly elaborate on the nature of its ties with other Islamist groups, the statement which was posted on a Facebook account claiming to be the group’s official page outlined that “Our loyalty to qaeda al-jihad and all jihadist groups in the world has been declared since day one.” It added that they have their “organizational independence” and “not linked to any group abroad.”
According to Aaron Zelin, a researcher on Muslim extremist groups at the Washington Institute, “qaeda al-jihad” could stand for “principle” or “base” of jihad but quickly hinted that such a phrase is used as Al-Qaeda’s official name in a Twitter post on Wednesday.
Ansar al-Sharia also launched a serious warning to the “oppressive government and its ministry of Terrorism” that they want to lead the country into “chaos” and “bloodbath.”