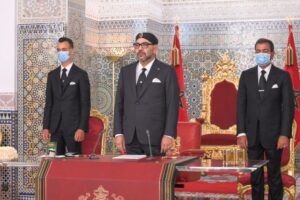 King Mohammed VI has called on the government and all stakeholders to take up the challenges spurred by the coronavirus pandemic to rethink the priorities and lay down the foundations for a strong, competitive economy and for a more inclusive social model.

In his speech made Wednesday on the occasion of the 21st anniversary of his accession to the throne, the Monarch said this health crisis has shown not only the strong social bonds and solidarity between Moroccans but it has also revealed a number of shortcomings, especially in the social field.

He urged the Government and the various actors concerned to focus on the challenges and the priorities imposed by the present circumstances, stressing the need to launch an ambitious economic stimulus plan to enable productive sectors to recover and to increase their ability to provide jobs and preserve sources of income.

After recalling the difficult but necessary measures taken to prevent the spread of covid-19, the Sovereign called for the adoption of a plan to make sure the country is prepared to face a possible second wave of the epidemic, especially in view of the laxness noted recently.

“Our action is not limited to simply facing up to the current epidemic. We also aim to address its social and economic effects by building on a comprehensive and future-oriented approach”, underlined the Monarch.

“This means we must mobilize all available resources, offer incentives and come up with solidarity measures to support businesses, especially small and medium-sized enterprises, which are the backbone of our economy”, added the King.

To achieve this goal, over $12 billion will be injected into the national economy, representing 11 pc of GDP – which will place Morocco at the forefront of the most enterprising countries in terms of post-crisis stimulus packages, said the Monarch in his throne Day speech.

To ensure the success of this plan, the Sovereign called on the Government and on economic and social actors to engage effectively in this endeavor, and to show a sense of responsibility as the country is implementing a constructive national contract meeting the expectations of the Moroccan people.

The King also stressed the need to speed up the reform of the civil service, address the structural deficiencies of public institutions and state enterprises to achieve an optimal integration, and increase these institutions’ economic and social effectiveness.

In order to reach this target, the Monarch called for the creation of a national fund to be tasked with ensuring the strategic management of state contributions and assessing the performance of public institutions.
The goal of all these projects, initiatives and reforms is to promote development and achieve social justice and inter-regional cohesion, said the King, affirming that one of his most important objectives is the provision of social protection for all Moroccans.

“This will remain my chief concern until all segments of society are properly covered”, underlined the Sovereign.