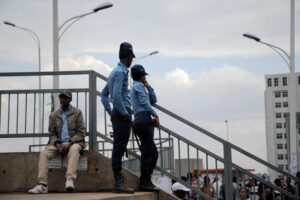 The Ethiopian Human Rights Commission is “deeply alarmed” by the “excessive use of force” by the authorities in the Oromia region. There have been reports of deaths since the beginning of the week during suppressed protests.

The protests erupted following alarmist reports about the state of health of one of Prime Minister Abiy Ahmed’s opponents.

Jawar Mohammed was arrested at the end of June. This was at the time of the death of the famous Oromo singer, Haacaaluu Hundeessaa, who was murdered in the capital. His death had triggered angry demonstrations in his home region. Since then, Jawar Mohammed has been held in detention, accused of plotting to organize the assassinations of officials of the Oromia Regional State.

The police are investigating. He has made several court appearances in Addis Ababa. During the last hearing, he complained of being ill. The information was confirmed by his lawyer.

It was then that inhabitants of several cities in the immense Oromia region took to the streets to call for his release. According to information on the Addis Standard website, dozens of people were injured. There were several deaths according to hospital sources in particular. Some eyewitnesses reported indiscriminate shooting at the demonstrators, sometimes at their back.

The regional authorities and the federal army, which responded firmly, did not mention any possible victims. They speak of attempts to turn the region into a “war zone”. The regional government spokesman, who blames “forces of destruction from abroad”, said the attempts were “stifled”.