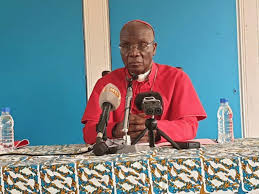 As the October 31 elections approach and as tensions mount, Cardinal Jean Pierre Kutwa, Archbishop of Abidjan, called for respect for the constitution, appeasement and dialogue as a prelude to the elections, and spoke out against the candidacy of Alassane Ouattara.

In a lengthy statement on Monday, the prelate said: “I cannot remain silent any longer, I solemnly appeal to the individual and collective conscience to put an end to violence and to make room for dialogue.” Cardinal Kutwa, who decided to speak after the murderous events of recent weeks said “I would like to invite everyone to engage in dialogue and consultation in the search for solutions to this crisis, which does not bode well for the peaceful organization of the elections».

The Prelate deplored the antagonistic readings of the constitution by the different political camps and called for a scientific and definitive exegesis of the fundamental law. “What would be the use of a compass that indicates one day the North and another day the South? The basic law, which can be regarded as a compass, cannot mean both one thing and its opposite».

Cardinal Kutwa also addressed outgoing President Alassane Ouattara saying “I cannot but respectfully turn to the President of the Republic, Head of State whose candidacy in these upcoming elections is not necessary in my humble opinion. His regalian duty as guarantor of the constitution and of national unity calls for his courageous involvement, with a view to restoring calm in the country, bringing Ivoirians together, and taking the time to organize the elections in an environment pacified by reconciliation.»

“Dura lex sed lex, the law is hard but it is the law,” the cardinal insisted, considering that respect for the law, more than elections, is one of the roads to reconciliation.