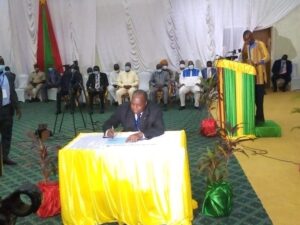 The various actors involved in the upcoming elections are committed to not throwing fuel on the fire in an already fragile context. Candidates, media leaders, leaders of social organizations and activists have signed a pact of good conduct under the aegis of the Higher Council for Communication for a peaceful campaign and elections.
The ultimate objective of this pact is to prevent electoral political discourse from jeopardizing social cohesion. The signature took place this Monday, October 26 in the presence of the head of government and representatives of the technical and financial partners involved in the organization of the elections of November 22.
Thus, by signing this pact of good conduct, the various candidates for the presidential and legislative elections, media and civil society leaders commit themselves to a campaign and peaceful elections.
“Candidates agree to nurture and avoid all hateful, stigmatizing and divisive language. They undertake to resort, if necessary, to legal conflict management bodies. They undertake to sensitize their activists to have a soothing and unifying language,” said Mathias Tankoano, President of the Higher Council for Communication.
Clément Sawadogo, representing the candidate Roch Marc Christian Kaboré, assures that the member parties of the majority alliance will do everything possible to respect this commitment: “We commit ourselves to carry out a peaceful campaign, a campaign in courtesy, a campaign in mutual respect and consideration”.
Zéphirin Diabré, the leader of the opposition, believes that this pact of good conduct does not include all aspects related to the election campaign. “There are some behaviors that we are currently seeing on the ground that we have problems with. When we see all the electoral corruption operations, it does not solve all the issues that can taint the transparency, and therefore the calm, of the elections. We need to have a much more in-depth reflection,” he stresses.
A few days before the official opening of the electoral campaign, the president of the Superior Council of Communication assures that his institution will ensure that this pact of good conduct is respected.