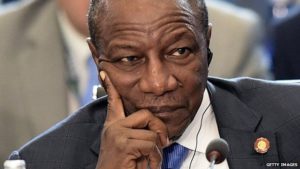 A joint UN-AU-Ecowas mission has been in Conakry since Sunday to try to find a way out of the crisis. After meeting on Monday, October 26 with officials of the Electoral Commission, the government, and the diplomatic corps, it went to the home of the opponent Cellou Dalein Diallo. Meanwhile, a precarious calm still reigns in the capital Conakry. According to the government, 21 people have been killed in the post-election violence, and the UFDG estimates that around 30 people have been killed.
Cellou Dalein Diallo wanted to meet the delegation at his party’s headquarters, finally, it took place at his residence in the Dixinn neighborhood, surrounded by pick-up trucks of the defense and security forces that control the entrances. Inside, in the garden, about fifty guards and activists dressed in green polo shirts in the colors of the UFDG.
For more than two hours, discussions are held in the private living room of the opponent. His entourage indicated that General Francis Béhanzin, ECOWAS Commissioner for Political Affairs, Peace and Security, was not welcome; he was not present.
At the end, the president of the commission of the West African organization Jean-Claude Kassi Brou, made a very brief statement. “It is a question of bringing back a little more confidence between the actors, bring back a little peace, serenity, and above all stop the violence. I would like to take this opportunity to thank Cellou Dalein Diallo and his entire team with whom we had a very good discussion, very frank exchanges. We will continue our consultations».
Cellou Dalein Diallo, for his part, asserts that he “does not expect much from these emissaries”, who, he says, “have always sided with Alpha Condé”.
Just after the meeting, the UFDG claims that its two vice-presidents, Fodé Oussou Fofana and Kalemodou Yansané, were arrested by the police. The delegation’s press conference, scheduled for Monday evening to review its mission, has been postponed.