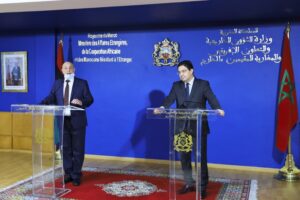 The Moroccan diplomacy expressed its supports for the UN-brokered ceasefire agreement between the Libyan parties, noting that this represents a “huge leap forward.”

The remarks were made by foreign minister Nasser Bourita who congratulated the Libyan parties on this breakthrough and urged the need for respecting the ceasefire agreement in order to pave the way for a political solution.

Speaking to the press after talks with Speaker of Libyan Parliament Aguila Saleh, Bourita underscored the success of Bouznika talks which brought together the Libyan parties far from any foreign interference.

Bouznika talks showed that Libyans are capable of resolving their differences themselves without foreign interferences, he said.

Saleh for his part welcomed the efforts deployed by Morocco in favor of a political solution in Libya which created conditions propitious for the ceasefire agreement between the Libyan parties in Geneva.

Morocco has shown steadfast commitment to a political solution in Libya since the Skhirate agreement in 2015, he said.