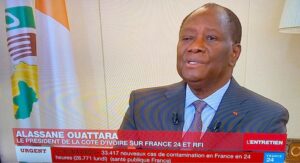 Four days before the presidential election in Côte d’Ivoire, President Alassane Ouattara said in an interview with French media, RFI and France 24, that the Constitution prohibits him from changing the date of the election.

“It would be perjury, because the Constitution sets the election for the last Saturday in October. It will therefore take place on that date,” he said when asked if a postponement was possible.

Trying to give an image of serenity a few days before the presidential election of October 31, President Alassane Ouattara brushed aside his opponents’ accusations of megalomania. “It is my love for my country that drives me to run. With me, the defeat [of my opponents] is certain. That’s why they decide not to go.”

He proposed to restore the age limit for presidential candidates, saying it would be difficult, even impossible for him to be a candidate in 2025.

The outgoing president said he does not wish to be a candidate in 2025. “That’s enough. It’s a sacrifice I’m making for this year. So [for 2025], it would be difficult, even impossible for me [to run].” He expressed hope that the constitution will solve the age limit of 70 or 75, which would automatically exclude the candidacies of Laurent Gbagbo, Henri Konan Bédié and himself.

As to the possibility to have a tête-à-tête with Henri Konan Bédié before the elections, he said he had indicated his availability for such an encounter, but President Bédié doesn’t want it. “I’m not going to rush him.”