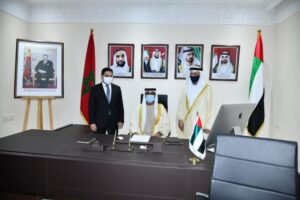 The decision of the United Arab Emirates to open a Consulate General in the Sahara city of Laayoune, that was officially inaugurated this Wednesday, illustrates the Gulf country’s firm position in the defense of Morocco’s legitimate rights and sovereignty over its Sahara.

Emirati Foreign Minister, Sheikh Abdullah bin Zayed Al Nahyan, said the opening of the UAE Consulate General in Laayoune will give new impetus to the “solid and strategic” relations between the two countries.

“This act is an indication of the long-standing and strategic nature that has always marked the ties between our two countries,” said the Emirati official in a pre-recorded video address broadcast during a ceremony held following the inauguration of the UAE diplomatic representation.

He also expressed the hope that this diplomatic representation will play a “decisive role” in consolidating economic opportunities, expanding areas of understanding and promoting channels of cooperation.

The United Arab Emirates becomes the ninth country to open a consulate in Laâyoune, in less than a year.

The UAE is also the first Arab country to establish a diplomatic representation in the Moroccan southern provinces, in a move reiterating the Gulf country’s support for Morocco’s sovereignty over the Sahara.

Emirati news outlet “Al-Ain Al-Ekhbariya” hailed the opening of the consulate in Laayoune as a historic event that strengthens the strategic partnership between the two countries.

The decision “is part of the fruitful relations of cooperation and effective solidarity linking the two countries and illustrates the unwavering position of the United Arab Emirates in the defense of the legitimate rights and just causes of Morocco, and its constant position alongside the Kingdom in local and international forums,” the website outlined.

Moroccan-Emirati relations are experiencing “remarkable development, which led to Abu Dhabi’s decision to open a consulate general in the city of Laayoune, located in the south of the country, in a step described as historic by Rabat, wrote the author of the article.

The countries having a diplomatic representation in Laayoune are the Comoros Islands, Gabon, Central African Republic, Sao Tome and Principe, Burundi, Côte d’Ivoire, Eswatini and Zambia, while Burkina Faso, Djibouti, The Gambia, the Republic of Guinea, Guinea-Bissau, Equatorial Guinea, Liberia, and Senegal have opened consulates in Dakhla.

Besides these significant diplomatic gains scored by Morocco in Africa, the opening of the UAE consulate in Laayoune will surely prompt other Arab states that support Morocco’s territorial integrity to make similar decisions.