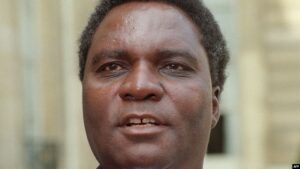 Agathe Habyarimana, the widow of the former Rwandan president, suspected of being involved in the 1994 genocide, was heard by the French justice system on Tuesday, November 3. A rare hearing in the context of the investigation into the role played by former gendarme Paul Barril at the time of the massacres.
It had been years since Agathe Habyarimana had been seen in public and this Tuesday she appeared in court in Paris. The slow but determined step, Agathe Habyarimana, 78 years old, arrived at the court of Paris. Hat, shawl and long beige coat, she let herself be guided by her lawyer to the office of the investigating judge.
Agathe Habyarimana, whom France has refused to extradite to Rwanda without granting her asylum because of suspicions against her, should be questioned about her links with Captain Paul Barril, ex-gendarme of the Elysée sous Mitterrand, who was converted in the 80s to security for African heads of state. This judicial information against the former soldier stems from complaints filed in 2013 by the association Survie, the International Federation for Human Rights (FIDH) and its French branch.
NGOs accuse him of having signed a $3 million arms contract with the Rwandan Interim Government (GIR) in May 1994, at the height of the genocide, despite an international embargo imposed by the UN. At the time, Paul Barril was in contact with the Habyarimana family, including the sons of the former president.
President Habyarimana’s widow is often presented as one of the leaders of the “akazu”, the first circle of Hutu power, which, according to her accusers, planned and orchestrated the genocide, which she contests. She was expelled from the country on April 9, 1994, and since 2008 she herself has been the target of an investigation into her role in the genocide, initiated by a complaint from the Collectif des parties civiles pour le Rwanda (CPCR).