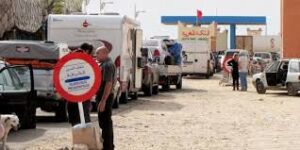 King Mohammed VI has rebuked the provocative actions carried out by the Algeria-backed Polisario armed militiamen in the southern crossing border point of Guerguerat in a bid to disrupt the normal flow of traffic between the North African Kingdom and its neighboring Mauritania.

In a speech made Saturday on the occasion of the 45th anniversary of the Green March, the Monarch said: “we categorically reject the unacceptable practices designed to disrupt the normal flow of traffic between Morocco and Mauritania” in the buffer zone.

He also voiced his complete rejection of any attempt to “change the legal and historical status of the territory east of the berm, or illegally exploit the region’s resources”.

“Morocco will not waver in its position. Nor will it be affected, in any way, by the useless provocations and desperate schemes of the other parties, which attest to a headlong rush, now that their outdated claims have failed”, underlined the King.

“As ever, Morocco will not only continue to abide by and uphold logic and wisdom, but it will also respond, with the utmost firmness and resolve, to any practices or attempts designed to undermine the security and stability of its southern provinces”, warned the Moroccan Sovereign.

He said he is confident the UN and MINURSO will continue to carry out their duties in terms of preserving the ceasefire in the region, highlighting the latest Security Council resolutions which have dropped unrealistic approaches and proposals.

The latest UN resolutions have insisted on the actual participation of the real parties concerned in this regional conflict and have irreversibly endorsed the political solution based on realism and consensus, recalled the Monarch, noting that this policy is in line with the Moroccan Autonomy Initiative, which is backed by the Security Council and the influential powers as the sole normal course of action for the settlement of this dispute.