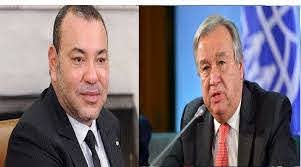 King Mohammed VI had a telephone conversation this Monday with UN Secretary General Antonio Guterres on the situation in Guerguarat in the Moroccan Sahara.

During this conversation, the Monarch said that “following the failure of all the laudable attempts by the Secretary General, Morocco has shouldered its responsibilities within the framework of its most legitimate right, all the more so because this is not the first time that the ‘polisario’ militias engage in unacceptable actions”, said a statement released by the Royal Office.

“Morocco has restored the situation, definitively resolved the problem and re-established the flow of traffic”, underlined the statement, affirming that the North African Kingdom “will continue to take the necessary measures to ensure order and guarantee a safe and fluid movement of people and goods” in this area on the border between the Kingdom and Mauritania.

During the telephone conversation, the King also reaffirmed to the UN Chief “Morocco’s steadfast commitment to the ceasefire” and underscored that the Kingdom “remains firmly determined to react, with the utmost severity and within the framework of legitimate defense, to any threat to its security and the peace of its citizens”.

The Sovereign assured Mr. Guterres that Morocco will continue to support his efforts within the framework of the political process which should resume on the basis of “clear parameters, involving the real parties to this regional dispute and allowing a realistic and achievable solution within the framework of the Kingdom’s sovereignty”, underlined the Royal Office statement.