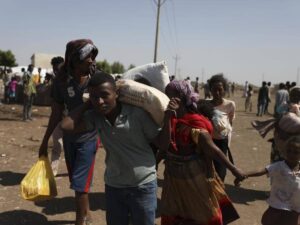 It is still difficult to really get a clear picture of the situation in Tigray, where communications are still cut off. Nevertheless, since it launched its offensive against the Tigray People’s Liberation Front 13 days ago, the Ethiopian government continues to communicate its successes on the ground.
The government has announced a new catch. The federal army would now have control of Alamata, a town on the southern tip of Tigray. Information confirmed by a Tigrayan source.
This locality, at the heart of a cotton-producing area, is only 120 km from Mekele, the capital of Tigray. Until now, the cities conquered by the forces of Addis Ababa, such as Humera or Dansha, were concentrated in the West. The capture of Alamata could mean the opening of a new front from the south. Evidence of the violence of the clashes, the city of Addis Ababa has announced the dispatch of about 50 health workers to the military posts in the north.
Officially, the federal government still refuses to negotiate.
Prime Minister Abiy Ahmed even announced that Tuesday, a two-minute national tribute would be paid to the army, but the Tigrayan authorities are far from laying down their arms. On Sunday, its president again accused Abiy Ahmed of being responsible for the suffering of the conflict and the destruction of infrastructure. Debretsion Gebremichael cited the Tekeze dam and the Wolkait sugar factory.
According to Paris-based opposition radio Erena, Tigrayan forces continued to bomb Eritrea on Sunday and Monday, including several localities in the south. The Tigrayan authorities accuse the neighbouring country of being involved in the conflict, adding that it can hit any target anywhere thanks to its missiles, some of which are said to be long-range. For their part, the federal authorities claim to be more than capable of succeeding in this operation themselves.
At the same time, a mediation attempt is reportedly underway in Uganda. President Museveni received this Monday morning in Gulu, the Ethiopian Deputy Prime Minister, Demeke Mekonnen Hassen, accompanied by a delegation. For his part, the former Nigerian President, Olusegun Obasanjo will also try to mediate. According to his spokesman, he is on his way to Addis Ababa where he wants to start talks.