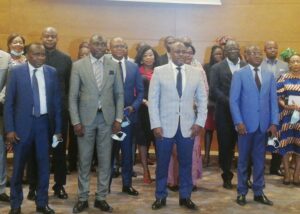 Two of the world’s closest capitals, separated just by the Congo River, Brazzaville and Kinshasa, share the same broadcasting and telecommunications frequency spectrum. This sometimes gives rise to misunderstandings. For a concerted management of these frequencies, the regulatory agencies of the two cities have just concluded an agreement.
A local radio that sizzles because of interference, a telecommunications network that is lost to another every time you get closer to the Congo River: these phenomena are often observed in Brazzaville.
It is to correct all these problems that the Congolese capital has reached an agreement with its sister city on the coordination and concerted management of frequencies at the borders. Kinshasa has even undertaken to return all the frequencies it used, but which were not due to it.
Joseph Yuma Utchedi, director of international relations at the Authority for the Regulation of Posts and Telecommunications (ARPT) in Kinshasa, welcomes the signing of this agreement.
“This is something very important because if the two countries do not get together, it is their consumers who are still suffering from roaming problems that need to be solved by coordinating frequencies as we have just done. Each time there will be an improvement, on both sides, on the improvements that are going to be made in the use of these frequencies between the two countries”, explained Yuma Utchedi.
Operators in both capitals were asked to properly parameterize the equipment used. A roadmap of actions to be carried out in 2021 and 2022 was defined.