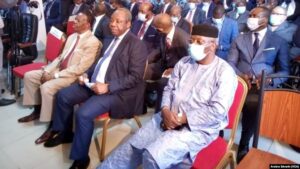 Majority party, opposition, and representatives of the former rebel leader, Pastor Ntoumi, have been meeting since Wednesday, November 25 in Madingou to prepare for the 2021 presidential election. Voting is scheduled for March. More than a hundred political actors and members of civil society are present at these meetings. What can we expect from these political consultations of the first stated objective is to calm the political climate before this deadline?
Deputy Prime Minister Firmin Ayessa set the scene by opening this political dialogue: “What brings us together here, by its very essence, is for any human society, the ferment of harmony, the catalyst for peace and the engine of progress,” Ayessa said.
Spokesman for the ruling Congolese Labour Party (PCT), Parfait Iloki welcomed the mobilization observed at this high mass. “The Madingou 2020 consultation has finally beaten the record participation of the Congolese political class. We therefore congratulate the organizers for that, and especially the opposition who did not come to make the stooge at this consultation,” he said.
The opponent Clément Miérassa, who was not invited to the consultation, rather expected a dialogue to deal with the multidimensional crisis that Congo is going through.
“As a burning problem in the country, there is not only electoral governance. The International Monetary Fund (IMF) is there to testify that the Congo has many challenges including problems of governance and transparency. This governance is political, economic and financial. It concerns all areas,” Mr. Miérassa said.
However, the main civil society platforms remain sceptical about the progress that could come out of it.
Concertations of Ewo in 2011, Dolisie in 2013, Sibiti in 2015, Ouesso in 2017, and now Madingou? “It has become a ritual,” says Roch Euloge Nzobo, a bit disillusioned. The coordinator of the human rights and development circle believes that there is not much to expect from these new consultations, which are only intended, according to him, for a “sharing of cake” between participants in view of the presidential election.
He deplores the absence of the most virulent opponents from these consultations, starting with the two former candidates, who are still in prison. The same criticism is levelled at Joe Ebina Washington, who coordinates the Congo civil society platform.
Unless changes are made, the work of the Madingou consultation will be closed on Friday, on the eve of the celebration of the 62nd anniversary of the proclamation of the Republic.