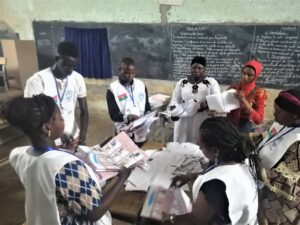 Four days after the double ballot of 22 November 2020, the country is still waiting for the results of the first round. The Electoral Commission continues to compile the results on a commune-by-commune basis. Almost half of the votes cast are already known.
For the moment, the results for just over 196 communes out of 351 have been unveiled. The Electoral Commission publishes all the results on its website as they come in, in the interests of transparency. In terms of number of votes, this proclamation approaches half since the important districts of Ouagadougou and Bobo-Dioulasso, which represent 30% of the electorate, are missing. The wait is prolonged.
According to a source at the Electoral Commission, 83% of polling stations have now been counted. In addition, the Commission confirms that the five opposition commissioners who had suspended their participation to denounce the lack of manual compilation at the communal centres have finally regained their place Wednesday morning in the institution in charge of the elections. Diplomats from ECOWAS, the African Union and La Francophonie have conducted a mission of good offices to prevent the process from getting out of hand.
ECOWAS and the African Union have just presented their report after Sunday’s vote. “Overall, the process took place in a peaceful environment despite the tense security context. These legislative and presidential elections are a crucial step in the consolidation of peace and the promotion of democracy. The mission appeals to the candidates to respect the results of the ballot boxes and urges them to resort, if necessary, to legal channels for the settlement of any electoral disputes,” said Kabine Komara, the former Guinean Prime Minister who led the observation mission in the sub-region.
Earlier in the morning, the opposition cancelled the small demonstration it had planned to organize in front of Electoral Commission HQ.