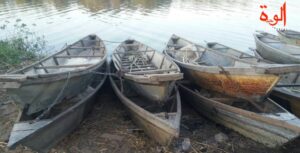 An explosion killed and wounded several army personnel during the night of Tuesday to Wednesday while soldiers were sailing on Lake Chad. An explosion that the authorities attribute to the Islamists of Boko Haram.
The motorized pirogue carrying the soldiers was travelling between the papyrus grasses in the Ngouboua sector on the northern shores of Lake Chad when it was blown up by an explosion caused by an improvised explosive device.
The army deplores four dead in its ranks and 16 seriously injured who were evacuated by helicopter to the capital for treatment. The authorities attribute the explosion to Boko Haram and announce that the modus operandi, an explosive device hidden in the water, is new.
According to terrorist experts, the armed group has adapted its modus operandi. This is the first time the Islamists have planted a bomb in water. A tactical evolution of the Boko Haram branch led by Abou Moussa el-Barnaoui.
In recent years, former EI fighters from Syria have provided combat techniques and supervised the fighters of this branch of Boko Haram established on the northern slope of Lake Chad.