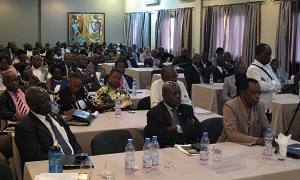 A deeper regional and international cooperation is essential to combating terrorism and illicit trafficking, two challenging issues that are at the heart of the world’s current preoccupations.
Such is the conclusion reached by a symposium on counter-terrorism cooperation and struggle against illicit trafficking held last week in Yaoundé, Cameroon.
The symposium, co-hosted by the Africa Center for Strategic Studies (ACSS), focused its debates on the magnitude and damaging effects of terrorism and illicit trafficking in the communities which are affected by these threats as well as on means to improve regional cooperation in countering terrorism and illicit trafficking.
U.S. Africa Command (AFRICOM) Project Manager at the J5 Counter-narcotics and Law Enforcement Division, John Harney, who took part in the symposium, provided an overview of illicit trafficking and laid out how AFRICOM deals with the issue.
According to an AFRICOM release, John Harney also pointed out interagency efforts to harmonize the U.S. government’s effort in building West African capacities to combat trans-national organized crime, particularly narcotic trafficking.
“It takes a network to defeat a network,” he noted, highlighting the importance of international cooperation in defeating international illicit trafficking networks.
The participants in the event agreed that the challenges facing Cameroon with Boko Haram’s spillover in the northern part of the country are global challenges.
The alignment of Boko Haram to the strategies of  Al-Qaeda in the Islamic Maghreb (AQIM) actually represents a real threat for security in West Africa, the entire Sahel region and beyond.
As a result, participants underscored, it will take an all-inclusive effort—for the U.S. and African partners—to deter and defeat trans-national threats and provide a security environment conducive to good governance and development.
Participants also agreed that deeper regional cooperation and international cooperation are keys to success in the struggle against the scourge.