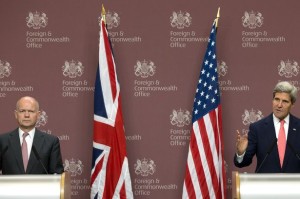 The chaos in Libya has surpassed the abilities of the Prime Minister Zeidan as he sorts for help from the international community. In a meeting with the Britain’s Foreign Secretary, William Hague, and US Secretary of State, John Kerry, Zeidan urged for an end to the militias in the country because they pose a big threat to Libya’s progress.
Since the fall of the Gadhafi regime, most of the armed men who took part in the uprising have been reluctant to give up their weapons. They have turned into militias and majority of them do not heed to the command of Tripoli. Prime Minister Zeidan was briefly kidnapped by one of the groups.
The meeting between Zeidan, Hague and Kerry took place in London. Zeidan told them that they have had enough of the militias before pointing out that a lot of efforts have done lately to “get rid of the militias”. He also thanked London and Washington for the role that they played in ending Gadhafi’s rule. The Prime Minister is optimistic that Libya will soon become “an active contributor on the world arena.”
Foreign Secretary Hague pledged Britain’s support to help Libya establish security and democracy and, along with Kerry, welcomed the withdrawal of armed militias from Tripoli.
John Kerry said “Libya has gone through great turmoil, particularly after the course of the last weeks”. He added that they have discussed means of helping Libya “achieve the stability that it needs”.  After the fruitful exchanges they had, Kerry said Libya presents “a moment of opportunity where there’s a great deal of economic challenge” but believes that there are also security challenges.
Western countries played an important military role in ending Gadhafi’s regime. The aftermath however has been very turbulent.