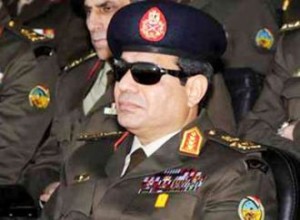 As part of a campaign to seek international prosecution of Egypt’s army-installed interim authorities, a three-member-delegation of former Egyptian lawmakers are touring West African countries to gather support.  The delegation was in Senegal before heading to Nouakchott, Mauritania. The members of the delegation who were once parliament members in the former regime want Al-Sisi to be held responsible for the “crimes” he has committed.
In Dakar, the delegation met with representatives of local and international rights groups to highlight the crimes committed by the interim rulers. The majority bloc in the Senegalese parliament reiterated popular and official opposition to the military coup in Egypt.
The legislators aim to take up the complaint before the African Court on Human and Peoples’ Rights and International Criminal Court upon reaching an agreement with international legal organizations after several consultations. The African Court on Human and Peoples’ Rights is an African Union court that has the legal authority to issue binding resolutions against human rights violations committed in members states of the African Union, of which Egypt is a member.
Former legislator Ezzedin al-Komi, a member of the delegation, mentioned the possibility of lodging a complaint against Egypt’s “politicized” judiciary with the International Association of Judges.
The interim rulers have been accused of killing hundreds of supporters of ousted president Mohamed Morsi. However, the interim authorities claim to be fighting against “terror” and strongly reject all foreign criticisms on the manner in which they are dealing with protesters. The interim government holds the Muslim brotherhood responsible for attacks on its officials. It labeled it as a “terrorist organization.” In its defense, the brotherhood has denied involvement in the attack and even condemned it as “an act of terror.”