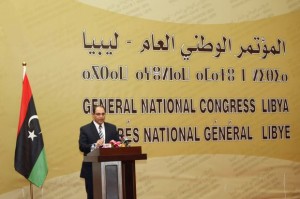 The vote to select the panel to be charged with the drafting of Libya’s new constitution which will help end a foreseen deadly conflict between Libya’s militias and parliament members, took place on Thursday. With about 700 candidates aspiring for a seat, the draft panel is to be the first of its kind since the ousting of Colonel Moammar Gadhafi’s rule. The call for elections by the United Nations in Libya followed the threat made by the militias demanding the resignation of the interim parliament in order to avoid detention.
After 42 years of being denied the right to vote, it is an honor worth preserving for Libya’s future generations. . In the eastern city of Derma, five polling stations were struck with explosions before the voting began. No casualties were reported and the cause of the blasts has not been ascertained.
The country is encountering political crisis in the post Gadhafi era but the impasse in the relationship between the militias and the parliament members has brought about a surge in the situation. Common occurrences such as targeted killings and abductions supposedly perpetuated by the militias have further destabilized the country. The institutions, left barely functional after Gadhafi, rely on the militias for imposition of order.
Regional, ideological as well as ethnic divides now rocks Libya seeing that Al-Qaaqaa and al-Sawaaq militias back the non-Islamist National Forces Alliance in parliament. Other militias, as well as those from the port city of Misrata, are supportive of the Muslim Brotherhood behind the Islamist bloc. A neutral body, The National Forces Alliance founded by Mahmoud Jibril, blames the government and parliament and urges them to corporate in handing over power to an elected body.