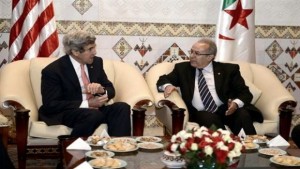 Algeria has received U.S Secretary of State John Kerry in a visit aimed at strengthening ties and cooperation between the two countries. After a closed door meeting, there was a joint press conference held by Algeria’s foreign minister Ramtane Lamamra and Kerry that concentrated more on the importance of military cooperation to fight Al-Qaeda in the Maghreb and the upcoming presidential elections.
Secretary of State Kerry said “we really want to work in a cooperative way” by the “tools and the training” that the Algerian forces need “to defeat Al-Qaeda and other terrorist groups operating in the region. Since the bombing of the twin centers which housed the World Trade Center 13 years ago, the U.S has been active in supporting countries to combat terrorism.
Minster Ramtane Lamamra, welcomed the initiative taken up the U.S but urged them to share intelligence with other countries if they want the operations to be successful. He told the press conference that the U.S has a capacity that no other country possesses as he makes reference to “electronic intelligence.” He said such intelligence is a “qualitative edge that only the U.S can provide.”
Kerry also said the United States would do more to build stronger commercial and investment ties between the countries. He said large-scale youth unemployment in Algeria was troubling and greater investment would help bolster job creation.
Algeria’s presidential elections are just a few weeks away. Kerry stressed that Washington is willing to “work with the president that the people of Algeria choose” in a free, fair and transparent elections in accordance with international standards. However, a planned visit to incumbent president Bouteflika has garnered criticism from the opposition that the U.S has already chosen its candidate.