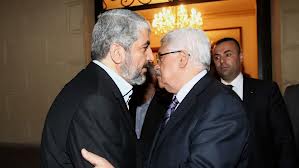 After more than a year since they last met in Egypt in January 2013, Palestinian President Mahmoud Abbas and Hamas Chief Khaled Meshaal have once again met in the Qatari capital to discuss their reconciliation agreement for a unity deal and its implementation, Hamas spokesman Sami Abu Zuhri stated. The two groups have been at logger heads since Hamas forcefully took over the Gaza Strip in 2007 from the Palestine Liberation Organization (PLO); which is largely dominated by Abbas’s Fatah movement.
Little information has been revealed about the meeting which took place in Doha. Khaled Meshaal has been residing in Doha since the crises in Syria, his former base, worsened. President Abbas met with Emir Sheikh Tamim bin Hamad al-Thani to discuss ways of strengthening the relations between Qatar and Palestine before seeing Meshaal.
The efforts of Fatah and Hamas to form a unity government and end the discord between them has not shown any signs of a possible failure although previous political reconciliation have always fallen apart.
Israel is not pleased with the unification efforts of the two groups. It has urged President Abbas to withdraw from the agreement because it will not negotiate with any Palestinian government backed by Hamas. Tel Aviv considers Hamas to be a terrorist group.
Security was high on the agenda during the meeting in Doha. Hamas government secretary Abdel Salam Siyyam highlighted that “there is a clause addressing the security situation, including… administrative arrangements for 3,000 members of Ramallah’s security apparatus to work as part of Gaza security.” These members are to work on a temporary basis in helping to patrol Gaza. The duration of the temporary basis were not emphasized on by Siyyam.