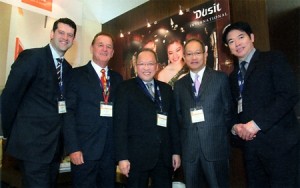 With political stability and security slowing creeping in into Tunisia, investors are also following suite. Dusit International has inked a deal to open a resort in the country’s third largest city, Sousse. Tunisia’s tourism sector is still struggling to recover after the 2011 events but Dusit International’s Managing Director and CEO Chanin Donavanik believes it is “an excellent time to enter this new market.” Sousse is a historic city known for its popular resort destinations. It boasts of receiving more than a million visitors per year and being listed as a UNESCO World Heritage almost 26years ago.
In seems as if Dusit International will be limiting its expenses because it will be reconstructing an already existing hotel and rename it Dusit Thani Samara Sousse. Estimations have not been forwarded but doors of the resort are expected to be open by mid-2018.
The decision to invest in Tunisia is considered as a bold step due to the fragile transitional periods North African countries have been experiencing since the Arab Spring begun.  The Managing Director and the CEO of the firm, Chanin Donavanik, is optimistic that the market will “recover sharply” adding that “prospects are exciting and political stability is back in place.”
Dusit International is pleased to be collaborating with Société de Tourisme Samara. Both sides are hoping that their efforts will be fruitful as Radhouane Mehdoui, CEO of Société de Tourisme Samara was quoted saying that “we see a clear future trend towards all things [that are] Asian.” He added that “Dusit’s signature gracious Thai service blends well with our local hospitality traditions, and combining their international hotel management experience with our local expertise will ensure the success of Dusit Thani Samara Sousse.”