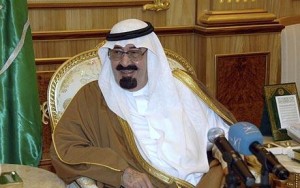 The King of Saudi Arabia Abdullah Bin Abdulaziz Al Saud, has donated $ 35 million to West African countries affected by Ebola, according to a statement from the Islamic Development Bank (IDB). Four countries are concerned by this gift: Guinea, Liberia, Mali and Sierra Leone.

The funds will be used to provide thermal sensors and screening equipment for the identification and treatment of patients with the virus. The equipment will be used in schools, airports, railway stations and public transport bus stations, the statement said.

The Saudi donation must also fund the establishment of specialized medical centers in the management of suspected cases in Guinea, Liberia and Sierra Leone.

In the statement the President of the Islamic Development Bank (IsDB) indicated that the program launched by the King and executed by the IsDB will combat against Ebola virus disease include the following:

The President of the Islamic Development Bank, Dr. Ahmad Mohamed Ali, said that the gift of the Custodian of the Two Holy Mosques is a valuable contribution to support the Islamic world donations to fight against this disease. He also confirmed that screening equipments to be acquired by the donation will help to quickly reopen schools in the affected countries. As for the new health centers, he said that they will strengthen the fight against the disease infrastructures and will deal with potential outbreaks that would appear in the future.

The World Health Organization announced on 17th December that 6,900 people died on the 18,569 who contracted the Ebola virus in three of the most affected countries (Guinea, Liberia and Sierra Leone) by the outbreak.