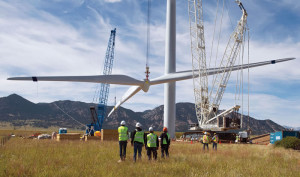 Located in northern Kenya, LTWP, the largest wind power project in Africa has been finalized, after eight years of preparation. Earlier this month, the project of € 623 million has reached a milestone with the completion of its financial closing, becoming the largest private investment ever made in the history of Kenya. He has won several awards and was recently named “African Renewable Deal of the Year 2014” by Project Finance International Thomson Reuters.

Turkana project includes an autonomous power plant of 300 MW, to be built and managed by the company Lake Turkana Wind Power Company, which will also own and an electrical transmission line of 428 km long, which will connect the power plant network to be constructed by the Government of Kenya.

The wind park project is expected to be the largest in Africa. It has benefited from AfDB financial assistance of the European Investment Bank (EIB), the Standard Bank of South Africa, Nedbank, the Netherlands Development Finance Company, Proparco, the East African development Bank (EADB), the PTA Bank, EKF, Triodos and the German DEG.

“This project highlights the role of the Bank as a catalyst for development of transformational infrastructure projects of this kind,” said Donald Kaberuka, President of AfDB, emphasizing the importance of the transaction.

The signature and disbursement is a sign that the funding of the project was completed; financial closure was finalized on December 11th, 2014. Construction is expected to begin in 2015, and the central start producing electrical energy from the beginning of 2016, and rewarding the home network of the country of 300 additional MW.