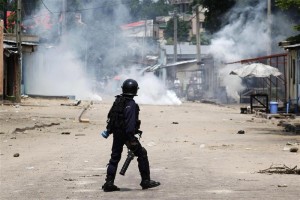 The opposition parties in the Democratic Republic of Congo (DRC) have decided to temporarily suspend their protests and wait for the outcome of the senate debate over the controversial proposed changes to the electoral code that will delay elections till after a census. The country has not had a census for almost 30years and the proposal to have one before the 2016 presidential elections is being considered by the opposition as a way of keeping President Kabila in power. The constitution bars the president from vying for a third term in office.

The protests which started on Monday have already led to several deaths. Telecommunications companies in the country have been ordered by the government to stop text message and internet services.

On Tuesday, opposition leader and National Assembly member, Martin Fayulu urged “the population to stop their demonstrations but remain vigilant” as they wait for the results of the senate debate. He stressed that an unwanted outcome of the debate will lead to the continuation of protests next Monday.

Another opposition leader who came out third in the last presidential election, Vital Kamerhe, threatened that “the pressure will continue until Kabila falls or withdraws.”

The senators were to vote on Monday but decided to postpone it because the tension was high around the area. Security forces and armored vehicles surrounded the senate to stop the progress of protesters who surrounded the area.

Martin Kobler, head of the UN Organization Stabilization Mission (MONUSCO), condemned the violence during the protests and pointed out that “the use of force by law enforcement officers must always be necessary, proportionate, and a measure of last resort.” He also urged the opposition to protest peacefully and in accordance with the law.