Political parties are divided over holding the general elections next week because of the ongoing violence in the north eastern part of the country and doubts whether the Independent National Electoral Commission (INEC) will be able to distribute Permanent Voters Cards (PVCs) to all eligible voters. An agreement was not reached by the governors after a seven hour meeting over the issue. General elections are scheduled for February 14 and 28. 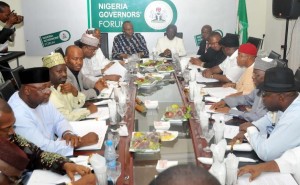 Security Chiefs presented a report at the meeting and asked for more time to end the Boko Haram menace in order to ensure security during the elections. The ruling Peoples Democratic Party (PDP) claims that Boko Haram poses a threat to voters but the opposition All Progressives Congress (APC) said the timetable fixed for the elections should not be changed.

The Chairman of INEC, Prof. Attahiru Jega, said they are ready to conduct elections but Governor Mimiko claimed that 34% of Nigerians are yet to receive their PVCs. Chairman Jeba gave assurances that all the Temporary Voters Card will be exchanged for PVCs before Sunday. The assembly of Nigerian governors forms the National Council State which serves as an advisory body but the decision to hold or postpone elections can only be taken by INEC.

The announcement of election results in Nigeria is often followed by violence. The prosecutor of the International Criminal Court, Ms Fatou Bensouda, has warned that the ICC will prosecute the crimes being committed by Boko Haram insurgents and other offences relating to electoral violence if the Nigerian government fails to do so.

Incumbent resident Goodluck Jonathan and General Muhammad Buhari have been crisscrossing the country to campaign for votes. Speeches have been centered on security, corruption and development.