Prime Minister Habib Essid had his government of 27 ministers and 15 deputy ministers approved by the parliament bringing an end to the standstill with opposition parties. 166 parliamentarians voted for the cabinet while 30 voted against with eight others abstaining. Speaker Mohammed Ennaceur said the approval of the cabinet marks “a new stage to build a new Tunisia.” 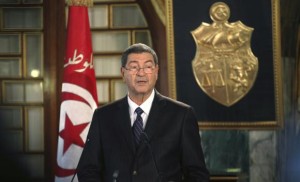 A motivated Essid said that he is conscious of the economic and security challenges the country is facing and promised to “work and nothing but work.” He added that the priority of the new government is to “strengthen measures to combat extremism and strengthen security capabilities to confront terrorism and the protection of the democratic transition.” Tunisia’s transition has been the most peaceful one among the countries that experienced the Arab Spring.

In a message to the ministers, Essid stressed that “every minister is required to get acquainted with the challenges facing his ministry within ten days and choose five of them to solve within the first 100 days.” Creating jobs and attracting foreign investment will be high on the government’s agenda.
Ennahda’s spokesman Ziyad al-Azari, handles the labor portfolio. The party threatened to vote against a cabinet that it was not part of and its inclusion was not welcomed by some members of the Nida Touness party because they claimed that the Islamist party helped to inflame the 2011 protests which led to the end of the Ben Ali’s rule.

The new government will be closely monitored by the critics of the Nida Touness party who claimed that the victory of the party in presidential and parliamentary elections signified the return of the Ben Ali regime. Most of the members of the party served in high posts under Ben Ali.