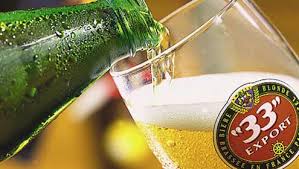 The Cameroonian Ministers of Trade and Finance have increased the amounts of alcoholic beverages according to the reform of the specific excise duties contained in the Finance Act of the year 2015. Thus, the amount of additional excise duty resulting from the application of the specific tax system is 75 FCFA for all the beers of 65 cl and 37.5 FCFA for all 33 beers cl.

Also, the government said, “For the implementation of this reform, no other price increment than this resulting from the impact of the tax is permitted.” From February 16th , 2015, date of entry into force of this new taxation specific excise duty, the price of each bottle of beer is expected to increase by 75 FCFA excluding VAT, for large bottles, and 37.5 FCFA at least excluding VAT for small bottles.

After several weeks of negotiations with the government, beer companies succeeded..

But beyond a simple adjustment, the Cameroonian government has just completed a real reform of the tax on so-called luxurous products. Indeed, the government’s decision of 12th February, which establishes specific taxation of excise duty, does not exclude the ad valorem tax of 25% in force for years in the country. In short, Cameroon is to opt for a joint taxation of this tax. This insofar as, in addition to 25% collected by businesses will now be added the amounts derived from the specific taxation (per bottle), the object of the government decision of 12th February.

That is why, beyond beer, government reform also affects wines, liqueurs and spirits, including the specific amounts of excise duty ranging from 100 FCFA to 4000 FCFA, according to the quality, or that these drinks are imported or locally produced.

For one of the leaders of the Union of farmers of Cameroon taverns, Hervé Nana, this measure is simply to reduce the profit margins of retailers and the amount of dividends paid by brewers, all of which induce increment of fixed expenses and making the situation untenable.