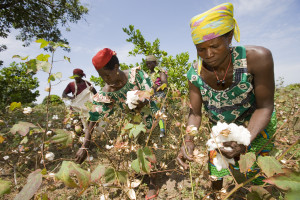 The West African Development Bank (BOAD), has announced this week, the disbursement of 115 billion FCFA to finance the cotton campaign of 2014-2015 in Benin. The Convention was signed in Benin’s economic capital by Christian Adovelande, president of BOAD and the General Director of the National Office of farm incomes and leaders of local banks engaged in operation.

This agreement is part of the implementation of financial and technical assistance mandate to the State of Benin by BOAD in February 2014 to mobilize funds from the 2014-2015 cotton season. BOAD has managed to unite around its several Beninese banks such as Ecobank, BOA, Atlantic Bank, BGFI, Diamond Bank, BSIC and UBA. A facility of 115 billion FCFA has been mobilized, with a contribution from the local banking system to the tune of 79%. In addition to its role as arranger of the transaction, the Bank contributes FCFA 25 billion to finance the campaign.

The funding will be allocated to cover the needs related to the 2014-2015 cotton campaign, including the purchase of cotton from producers, ginning and the storage, disposal and marketing of cotton fiber and derivatives. Forecast under this campaign is expecting a production of 360,000 tons of cotton seed on a planted area of ​​about 400,000 hectares.

This third agreement reflects the success of the previous two. The Beninese Government had sought the support of the BOAD under the cotton season 2012-2013. The sub-regional institution was then formed around a pool of local banks, and mobilized a facility of FCFA 82 billion. Beninese banks had contributed FCFA 62 billion, or 76%. These resources have helped to sow 351,000 hectares of cotton seed production of 240,000 tons. The facility was fully repaid at maturity.