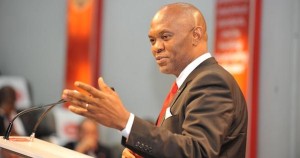 Tony Elumelu, the Nigerian entrepreneur and chairman of Heirs Holdings has launched in December 2014 in Lagos, Nigeria, “Tony Elumelu Foundation Entrepreneurship Program” to financing and support 10 000 start-ups and young companies in the 54 countries of the African continent.

According to figures from the Foundation to the magazine Jeune Afrique, nearly 9635 applications were received, 60% of the applications come from West Africa (with a very heavy weight from Nigeria), 15% from East Africa, 3.5% from South Africa, 3% from Central Africa, 1 5% from North Africa, and 17% from outside of Africa.

The registrations are fully done on-line then, a selection committee will list 1000 best files that will benefit from training and on-line tutelage, will participate in a boot camp as well as in a big forum, before benefiting from two times of 5000-dollar financing each once their businesses plans completed.

“Although the Foundation is based in Nigeria, we are surrounded by several French-speaking countries that also create some of the next business managers in Africa. The diversified nature of applications received up to date, shows that our geographical situation did not limit us to the English-speaking market only. We are delighted to see people all over the continent being candidate on our on-line portal“, added the Nigerian businessman and philanthropist.

For the record, Tony Elumelu Foundation Entrepreneurship Program is a program over ten years that aims at training, financing and supporting 10 000 start-ups and young companies in the 54 countries of the African continent.