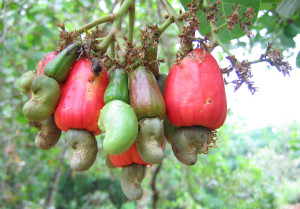 According to an official of the Ministry of Trade, Industry and SMEs who requested anonymity but quoted by Xinhua news agency, this trend reflects the growing importance of cashew in agriculture in Benin. “This speculation which agricultural production area covers six of the twelve districts of the country is becoming increasingly important as socio-economically and environmentally.” He told Xinhua, before illustrating his point with statistics.

According to a study by the Chamber of Commerce and Industry of Benin, raw cashew nut exports of Benin on the international market, especially in China, Indonesia, Vietnam and the European Union have evolved in recent years, going from 19,174 tons in 1997 to 69,357 tons in 2006.

“This increase in the penetration of Beninese cashew in the international market, coupled with an improved margin of farmers and other stakeholders showed cashew as a strategic product whose development prospects are promising,” reveals the study.

According to the Chief of Staff of the Benin Minister of Agriculture, despite this favorable situation of the moment, the trend in the medium term self-sufficiency in Asian countries should guide national policy to a sustained increase in local processing.